U.S. futures, including for the S&P 500, Dow Jones and NASDAQ, along with Asian shares started the week on the back foot, ahead of the unofficial Q1 2020 earnings season kickoff, as huge questions regarding the impact of COVID-19 on corporate growth remain to be answered.

The price of oil failed to respond to an anemic production deal among OPEC++ constituents, touted as historic.

Most major European markets were spared losses this morning, as they remain closed for the extended Easter holiday. But futures for the S&P 500 are suggesting the underlying benchmark will extend an Evening Star, a bearish, 3-candle formation, that began forming at the close of Thursday’s trade. 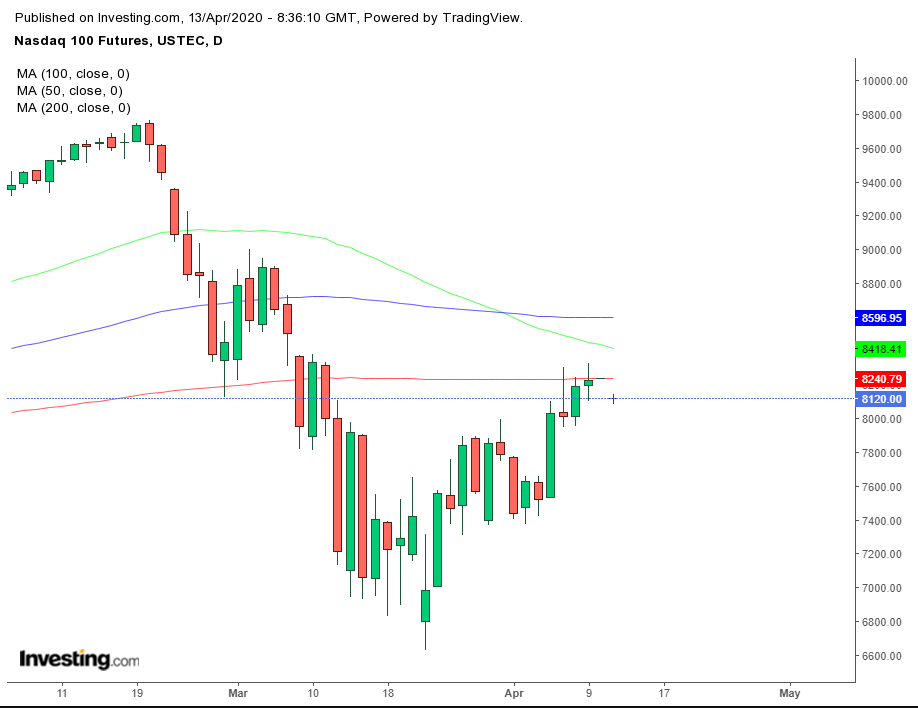 Contracts on NASDAQ 100 fell away after Thursday’s failed attempt to close above its 200 DMA. The 50 DMA crept closer, threatening the much-feared Death Cross, which would occur when falling below the 200 DMA.

Though U.S. markets were closed at the end of last week, for Good Friday, investors were able to celebrate the best week for equities in 46 years pumped up by the Fed’s promise of unlimited QE. The central bank move was triggered by accelerating coronvirus-driven lockdowns, and was meant to offset ballooning unemployment claims across the U.S., on a scale not seen since the Great Depression. Markets, however, saw it as Fed candy.

Investors jumped back into risk assests, ending the fledgling bear market, establishing a new bull run as a result. While we consider it sickly, we must nonetheless recognize it’s still bullish, until such times it satisfies the requirements of a reversal.

Yields for the U.S. 10-year Treasury edged higher Monday morning, as the dollar was sold off for a third straight day. 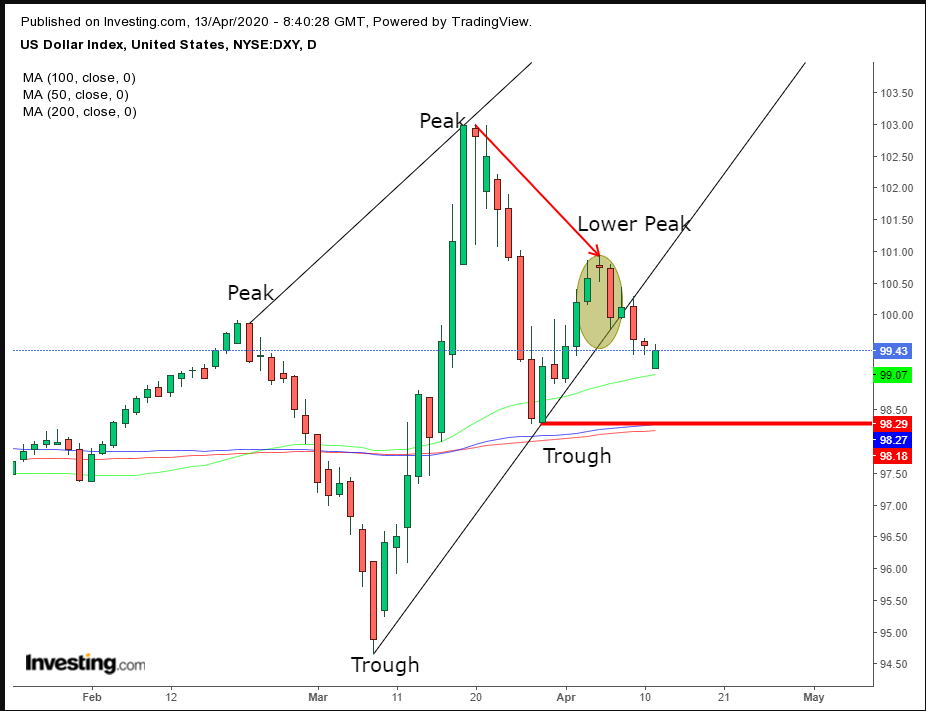 While the USD rebounded, along with the 50 DMA from session lows, it extended the penetration below its rising channel, edging toward a trend reversal. 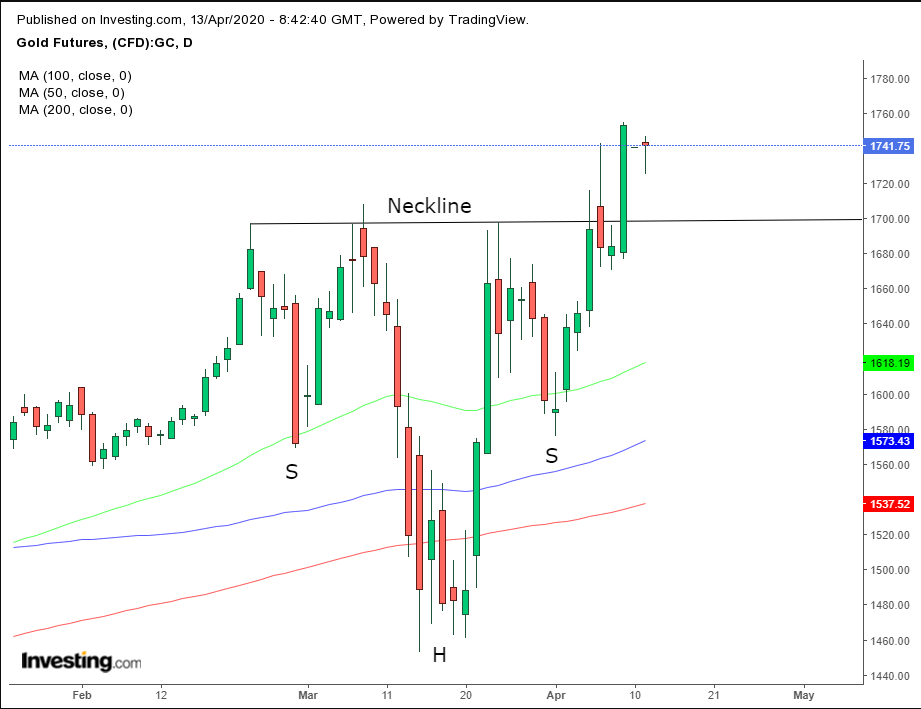 Gold futures retreated, even with though both stocks and the dollar were weaker–rare indeed–perhaps on the technicals. The precious metal contract might be correcting after completing a H&S top, with $1,700 as its neckline. 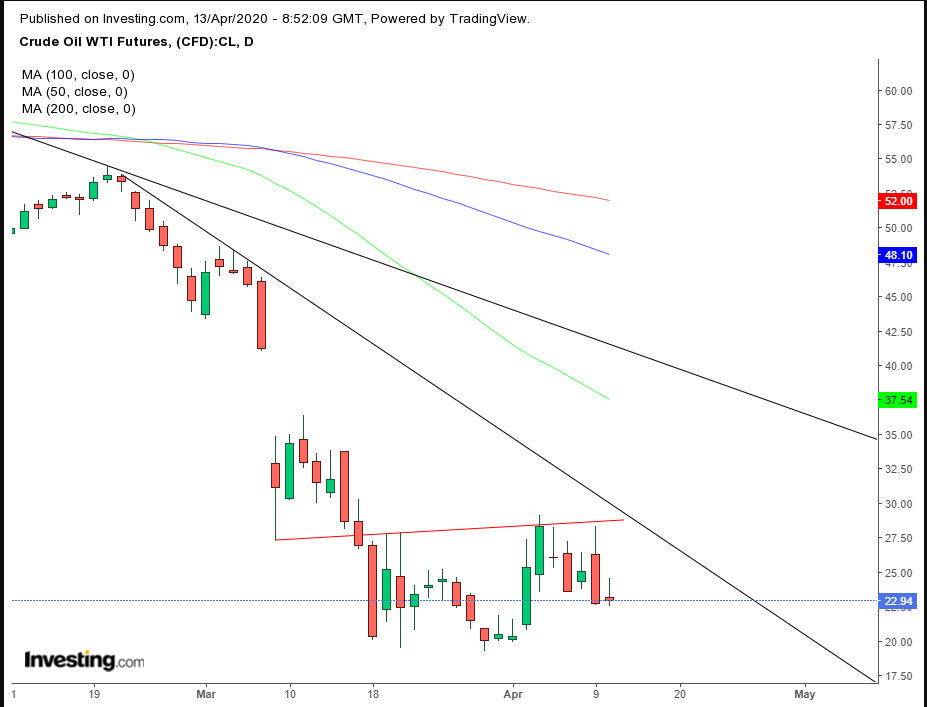 WTI gave up a knee-jerk rally after oil producers reached a deal to reduce production by 9.7 million barrels, missing the 10 million mark they’d originally set out to cut. Additionally, many are speculating “the great battle for market share between the Americans, the Saudis and the Russians will probably restart once demand for crude oil returns.”

Technically, the price of the commodity may be forming a bottom, if it crosses the $30 barrier, a 25% increase at these low prices.

Crude oil prices plunged sharply on Thursday, extending losses to a fifth session, amid concerns about the outlook for energy demand. The coronavirus has...